God doesn’t waste a single second. I’ve never seen so much personal transformation in such a short time or had the knowledge of having had a lasting impact quite as much as I did with this last trip. For security reasons I’m going to slightly change names and things like that to protect people but I will not change details on what happened or what God did through me on this trip. Sorry if this update seems a little vague, it has been done intentionally. If you want more details please email me.

Firstly I just want to reiterate my heartfelt thanks to those that supported me both in prayer and financially. I want you to know that you had a most profound effect on long term workers, on a nation and in what God is doing all over the world.

This was the pioneering trip to North Africa. It was an honour to be selected to go on this particular trip over a possible 75 other locations. With my previous travel experience I was so excited to go to somewhere I’d dreamed of going for years. I’d never been to Africa before so that just added to the excitement. I want to touch on what the team and I did but I also want you to know what effect this trip had on me.

The first few days involved the team and I running a conference focussed on teaching much of what we had been learning this year at school (BSSM) I had an extremely busy few days as I was leading worship and leading the band. My birthday was actually the second day of the conference and ironically the busiest day of the conference for me too! I had band practice at 8am then the first session and worship set from 9-10am, I taught two 1.5 hour breakout sessions back to back on worship and then practiced for the Sunday service 4:30-6:30pm, practiced for the evening session 6:30-7:00pm and then the evening session immediately after so by the end of the day I was completely and utterly exhausted. The only logical thing to do in this situation is exactly what I did. Went with another one of the guys from my team and another friend and had birthday dinner which consisted of a sheep brain sandwich. Yes you heard right. May as well add to my list of exotic foods that I’ve eaten! It wasn’t even too bad! The last day I had the opportunity to play for the Sunday morning service and discovered I have a little bit of ‘black blood’ as they called it when I discovered I could play a few of the African rhythms. Music for those of you that don’t know is a huge passion of mine so learning to play African style guitar was a huge bonus for the trip! The last session was extremely powerful and Holy Spirit really just took over the entire meeting and the team and I were able to minister powerfully to a number of individuals and I wound up talking to one guy for well over an hour and saw tremendous breakthrough! 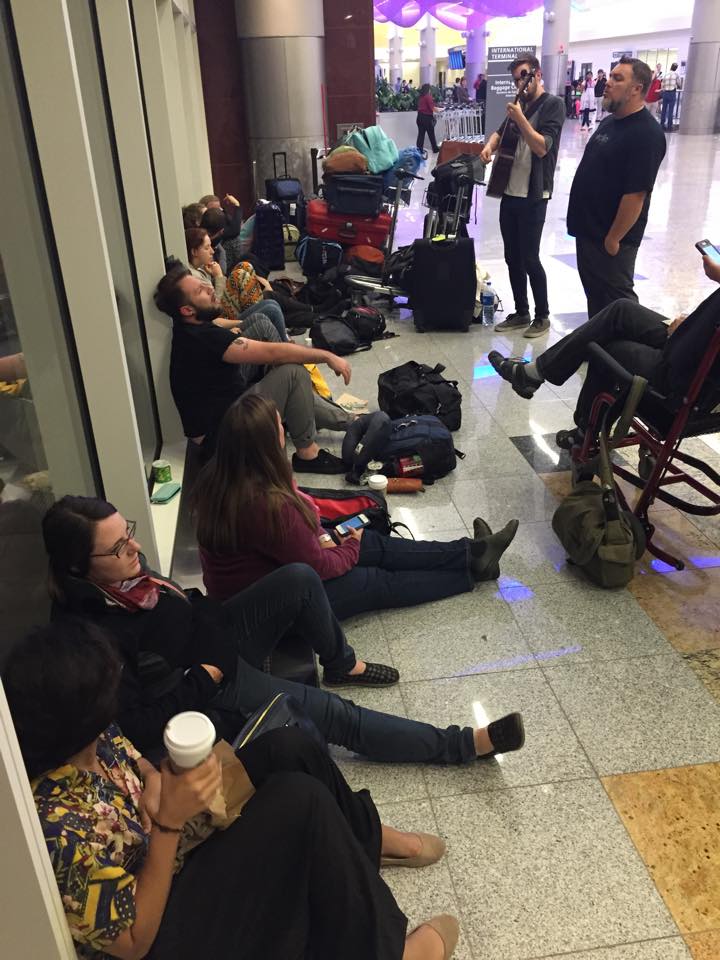 We missed our connecting flight home from Atlanta to San Francisco so we just had a worship time while we waited for our flights to be rebooked. (That’s me behind the guitar)

After that the team split up in to ‘micro teams’ that went to various cities around the country. We met with many different long term teams who were able to share with us the difficulties they face and some of the hardships and realities of life there. These people are the real deal. They are the ones laying down their lives for the locals and being Jesus to them. Cheap words of encouragement were the furthest thing from my mind. This was heart stuff. We asked them to share what their vision was for the next year and every person in the group had an individual on their mind that they wanted to see come to know Jesus. Just goes to show their hearts! The vision wasn’t ‘oh we want to see this resource come in and see what we are doing to grow x%’ it was all focused on people and on loving them. I got a few words of knowledge that really encouraged them. One was to do with the way I had been feeling ever since I got there. It was an overwhelming cloudiness of mind every time I tried to talk to God and God showed me during that time that that is how that team felt whenever they tried to pray. So I asked them if that was what their experience was and they said yes. So I prayed and told the cloudiness to go in Jesus name and at once my mind became clear again.

The same feeling came in the next meeting and I broke it off again and again my mind cleared and I could hear God as clearly as I normally do. I also got a word of knowledge about one of the families’ daughters that she was sick and her age and a few other details that were a visible encouragement. We also prophesied over every team and answered as many questions as we could. We made sure they knew that this wasn’t THE only team. That this was the first of many teams to come and visit them and that they didn’t have to bear the weight of their work alone anymore. That there were now people all over the world praying for them (which is absolutely true). The knowledge that they were not isolated any more from support and encouragement turned tired looks into smiles. They were already full of passion and hope but just tired from being in the field for so long. Everyone who walked in tired left smiling, laughing and full of hope and joy. We met with many different teams during our short stay there and it was such a privilege to hear about each teams work and to answer their questions and speak into their lives. 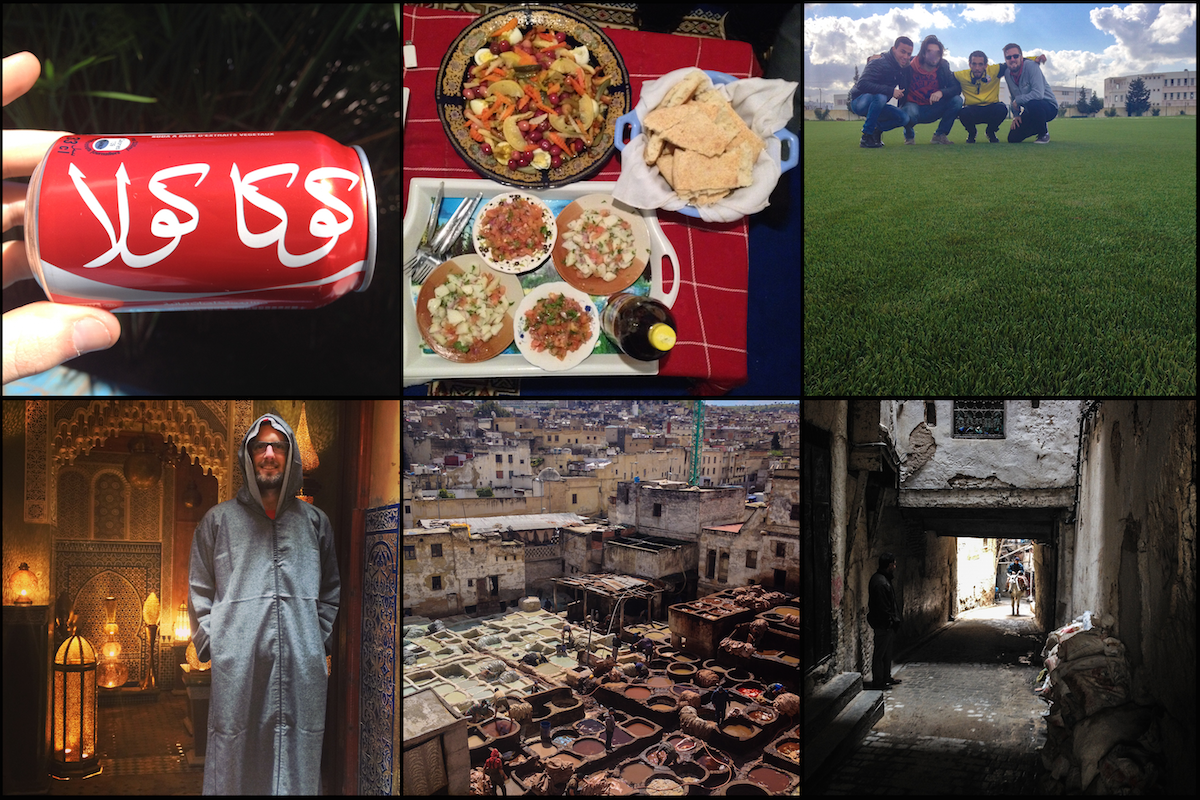 Top L-R    Coke can that if you read it left to right kind of looks like another word. Love it! – The mouth watering midnight tagine! – Getting a guided tour of the local university from some locals.

Bottom L-R    I bought a Djellaba which is traditional Berber dress, really comfy and it stopped the local shopkeepers from trying to sell me so much stuff! – The tanneries that still make coloured leather the same way they have for almost a thousand years! Amazing! (I bought a belt from here) – An example of the stunning ‘bible times’ looking streets of the medina (city).

We saw God heal many people’s physical bodies as well as many hearts and minds revived and healed. We also had the chance to teach some music at a local school as well as many other opportunities. Something I loved doing though was meeting various Muslim families and being able to go over to their house at night time to just sit and talk with them and get to be with them. One of our contacts had developed a friendship with a guy who invited me to his house to hang out so one night I went over and was just talking in a mixture of English, Spanish, Arabic and the occasional helping hand from my contact whenever we happened upon a word we didn’t know the English or Spanish for. All in all it was a fantastic evening that got infinitely better when his mother walked into the room with a mouth watering tagine. So at 12:30am we just started downing this delicious tagine with of course copious amounts of the national mint tea to wash it all down. Absolute perfection! I know the impact I will have had on the locals is small but important. What I am more excited about is that I was able to impact those that are there for the other 50 weeks a year faithfully serving.

I want to share what God did for me personally on this trip. Something I have always struggled with is the thought that I am helpless in my circumstances. That I can’t really change what is happening around me and so I’ll just go along with the flow. This has got me into all sorts of trouble over the years even after I gave my life back to God (See Starting Out). Whenever I travel to another country its almost like the atmosphere of the place I am in affects my mood and my relationship with God. However this year I have been learning that Holy Spirit living in me is stronger than anything outside of me and that I can change my environment because what I ‘carry’ is stronger than any force of darkness. So when I went on this trip I found myself recognising that I was beginning to be affected like normal but instead of giving in I just rejected the influence and said no, I’m a son (Galatians 3:26) and I won’t let how I feel right now dictate whether or not I get to talk to my Father. I noticed the strangest thing happen, whenever I would start to feel attacked spiritually I could just reject the feeling at talk to God and it would leave straight away. The story I mentioned just before about feeling that cloudiness is another thing I had not experienced before in that same way. I recognised that this cloudiness of mind was not actually my reality but it was what the others in the room were feeling.

I now know for certain that no matter where I go, nothing can separate me from God’s love and from communication with Him. That I am powerful and not helpless. When I am tempted and when I don’t feel powerful I can lean on His strength and He will come through for me. That’s some good news!!